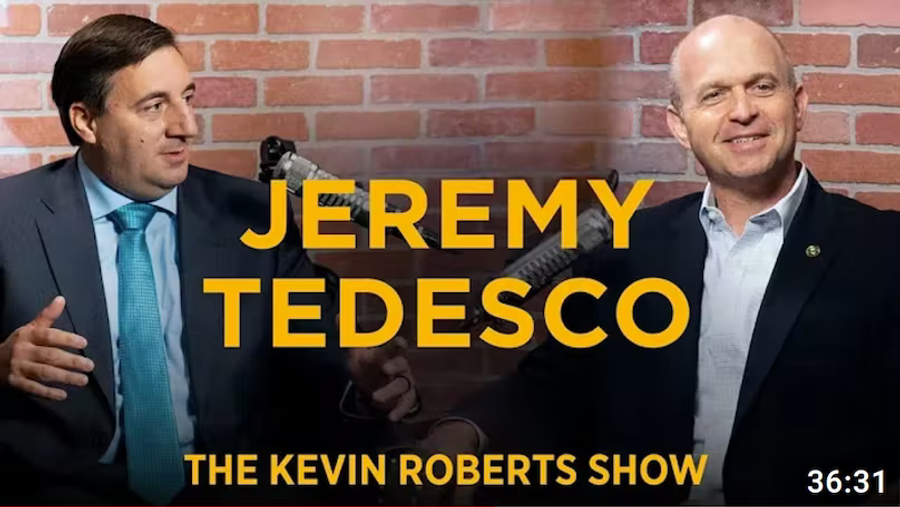 Appearing on The Kevin Roberts Show this week, Jeremy Tedesco spoke with the Heritage Foundation president about Viewpoint Diversity Score and its 2022 Business Index.

Tedesco, who serves as senior counsel and senior vice president of corporate engagement for Alliance Defending Freedom, has spearheaded the initiative, which evaluates the policies and practices of 50 publicly traded companies in the technology, banking, and services industries.

Shortly after the website and Business Index went public, the Heritage Foundation awarded ADF with a $100,000 “Heritage Innovation Prize,” recognizing the initiative as a ground-breaking solution to the most pressing issues facing America today.

“In the end, it’s about concentrated power,” Tedesco told Roberts, who was named president of the Heritage Foundation in October 2021. “The problem with concentrated power in our age really lies with private corporations. You can see that in social media companies, where a very small group of companies control . . .   what you can see, say, and talk about on their platforms. Most Americans, whether for good or for ill, really do exercise their First Amendment rights within those contexts.”

Viewpoint Diversity Score equips companies to take concrete steps toward respecting religious and viewpoint diversity in their business practices, workforces, and public affairs. Through our 2022 Business Index, we score viewpoint diversity in corporate product and service offerings, workplace, and in the public square. Most importantly, through our model policies, research, toolkits, and ongoing conversations, we show businesses how they can better support the basic freedoms of both their employees and customers.

Benchmarked companies scored an average of 12% overall on the Index. While no industry performed well, there were a handful that scored particularly poorly. The two industries with the lowest overall scores were computer software at 6%, and internet services and retailing at 8%. The financial and data services industry also came in at a low overall average score of 11%. These lackluster results paint a grim picture of Corporate America’s respect for religious and ideological diversity.

“These corporations, their policies and practices have an enormous impact on our public dialogue and our ability to debate issues, which is essential to a free society and democracy,” Tedesco said. “We were also concerned about the broader spread of this kind of social media attitude among other corporations like financial service providers and banks. That led us to believe that there’s an enormous risk of private corporations becoming as or a greater threat to free speech than the government.”

Watch the interview in its entirety here.